Additional Information X
By continuing to use our site, you consent to using cookies. We use cookies to improve your experience on our site and to show you content that is relevant and helpful. To find out more, read our updated privacy policy. 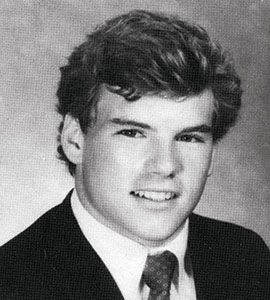 Dan Tate played on the varsity football team at St. Stephen’s School for three years and was a team captain his senior year. He played on the first St. Stephen’s lacrosse team and was later named captain of the lacrosse team as well. He also ran two years of varsity track, and played two years of varsity basketball. Dan was an example of commitment, hard work, and sacrifice to be one's best on and off the field. He focused on his academics—his name was regularly found on the Dean’s and Head’s lists—and his hard work and integrity guided him in leading his fellow classmates. He was on the student honor council, and class president both his junior and senior years.


James Taylor ‘84 explained that on the football field Dan “would only need the slightest hole in the line to break a long run.” In football, his senior year alone, he ran 788 yards as the running back, averaged 6.6 yards per carry, and scored 12 touchdowns. He earned All-IAC honors for football, and helped his teams win three IAC championships. That  football team was described as “a team of class and character. Under the superb guidance of the coaches, the leadership of the seniors, and the determination of the underclassmen, the team as a unit achieved its goal[s].” His junior year the football team had a perfect league record 9-0 with three shutouts. That same year the basketball team had an almost perfect league record of 11-1. He earned the John Morrow Stanton Athletic Award, given to the student who shows excellence in athletic ability, dedication, leadership, and character and the 1984 Outstanding Athlete Award given to the athlete who plays multiple varsity sports and has shown their ability and contribution to their teams.


When Dan graduated from St. Stephen’s School he went on to Amherst College where he played football and was a captain on their lacrosse team. It is his personal attributes that keep him connected with those he played with in the past. A close school friend, John DelNegro ’85,  sums up Dan’s character in the following way: “I’ve never met a finer combination of person, family man, friend, mentor, businessman, and Saint. He is the older brother I never had.”